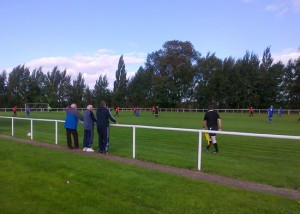 An affordable and safe post and rail spectator barrier system available. A spectator barrier system that is quick to install and one that can be removed in the close season for easier cutting of grass.The uPVC posts and rails are secured by strong polypropylene ” T brackets” with push and lock buttons. Two systems are available, one for fixed position posts that fit into ground sockets and one that has posts which slot over special ground spikes. Both systems are quick and easy to level on the undulating ground. The spectator barrier can also combine both types and is ideal when football pitches adjoin cricket pitches.The spectator barrier can be left in position during the season or it can be made to be taken down after each game.

The system can also accommodate lightweight aluminium posts and rails in specific areas of the pitch where slightly stronger rails are required. The uPVC spectator barrier is much safer than steel spectator barriers, it is rust proof, requires no painting and  needs very little maintenance.

To attain an up to date estimate  for your proposed site email  john@itsagoal.net   with the length and width of your pitch and a postcode of the site and we will send a  detailed estimate of the costs and the installation by return

Your club name, various messages and warnings can be added to the rails. Messages we use on our own sports ground spectator barrier are shown below. Advertising boards can also be fitted below the rails or roll up plastic banners can be attached with bungee ties between the posts.

The price is based on a fully surrounded pitch barrier size -105m x 75m. The price includes V.A.T.

TO SHOW RESPECT TO THE REFEREE & HIS DECISIONS

ABUSIVE & THREATENING BEHAVIOR IS NOT TOLERATED AT THIS CLUB

PLEASE DO NOT ENCROACH ONTO THE PLAYING AREA

SPORTSMANSHIP IS THE BEST WAY TO EARN RESPECT

PLEASE PUT YOUR LITTER & PLASTIC BOTTLES IN THE BINS PROVIDED

NO DOGS  ALLOWED IN THE  SPORTS GROUND